Sierra was a United States video game developer and publisher active in 1979-2008. They are chiefly famous for their graphic adventure games, such as the series King´s Quest, Police Quest, Space Quest, Quest for Glory, Gabriel Knight, and Leisure Suit Larry.

Throughout these years, this developer has used several different names:

On-Line Systems changed name to Sierra On-Line in 1982, because the company had moved from Simi Valley to Oakhurts, and the William´s were inspired by the nearby Sierra Nevada mountain range.

Sierra became a part of the CUC International company group (later known as Vivendi Games) in 1996. In 2004, Sierra was disestablished as a company and became a division of Vivendi Games instead. In 2008, Vivendi merged with Activision. As a result, Sierra briefly became a part of Activision Blizzard, but was shut down before the year was over. In 2014, Activision revived the Sierra brand and used it to re-release old Sierra games and some independently developed games. 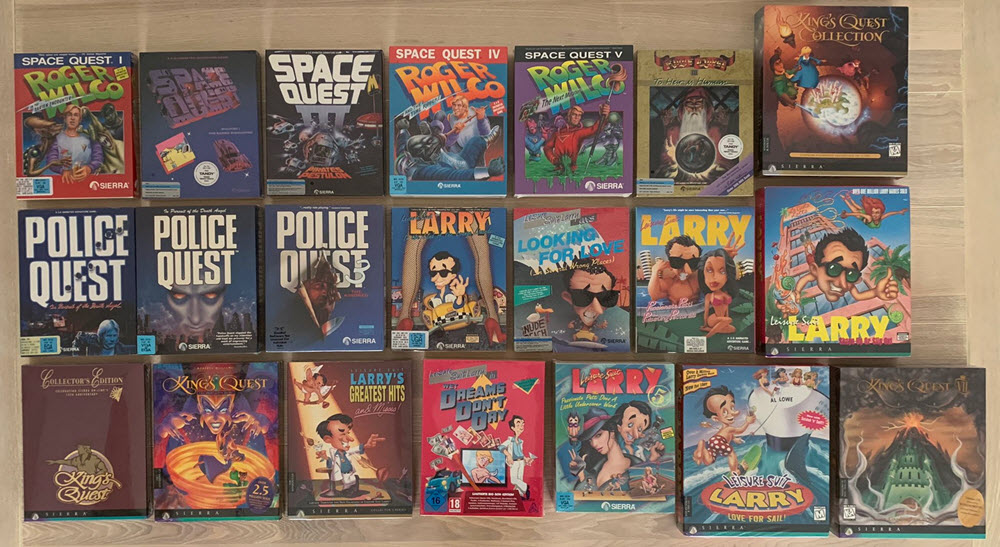 The married couple Ken and Roberta Williams founded On-Line Systems in Simi Valley, California in 1979. In the late 1970s, Roberta was a housewife with little interest in computers, but Ken was a computer expert who worked on huge IBM mainframe machines and he realised the potential of “microcomputers”. Ken got them a home computer, and Roberta soon took a strong liking to it – and to computer games belonging to the adventure-style genre. One of her early favourites was the text-based adventure game Colossal Cave, a game where the player use simple text commands to explore a cave in search of riches.

Soon, Roberta started writing her own game, and Ken programmed it for the Apple II. Roberta wrote the script in three weeks and convinced Ken to help her develop it in the evenings after work. The graphics were made by Roberta, using a drawing tablet called VersaWriter.The result was Mystery House, a graphical adventure game where the player explores a mysterious Victorian mansion filled with interesting rooms and characters. Mystery House was released by On-Line Systems in 1980 and is the world´s first graphical adventure computer game.

Mystery House met with great critical and commercial success, and Roberta and Ken embarked on a journey that would make them leading figures in the development of adventure-style computer games in the 1980s and 1990s.

This comedic game series was created for Sierra by Mark Crowe and Scott Murphy. The first game in the series – Space Quest: The Sarien Encounter – was released in 1986. It became an instant success and several more Space Quest games would follow. The hero of the Space Quest games is Roger Wilco, a janitor who travels through the galaxy as a champion of truth, justice and really clean floors. The comedic elements are chiefly parody, puns and wacky storylines.

Leisure suit Larry is a series of adult-themed video games created by Al Lowe. They were published by Sierra from 1987 to 2009, and then by Codemasters from 2009. The first game in the series – Leisure Suit Larry in the Land of the Lounge Lizards won the Software Publishers Association´s Best Adventure Game award of 1987.

Interestingly, Sierra sold many more hintbooks for Leisure Suit Larry in the Land of the Lounge Lizards than games, indicating that people were obtaining and using illegal copies of the software. The game is now considered one of the earliest examples of widespread game software piracy.

Police Quest is a series of police simulation computer games produced and published by Sierra in 1987-1998. Renowned in its own right, it is also famous for being the series that spawned the popular SWAT series, which contains games such as the 2003 SWAT: Global Strike Team (for PS2 and Xbox) and the 2008 SWAT Elite Troops (for mobile).

The Gabriel Knight series is comprised of three adventure games; each with its own supernatural theme.