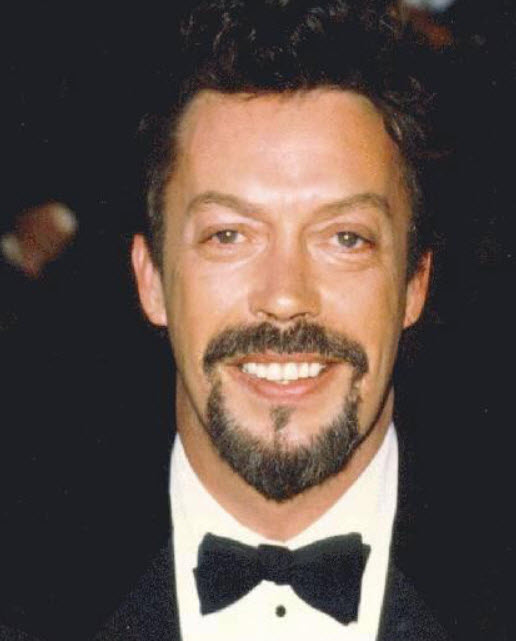 Tim Curry (b. 1946) is an English actor, voice actor and singer whose career includes everything from movies and TV-shows to theatre, musicals and video games.

Curry is know for having portrayed a wide range of characters, but is most famous for his portrayl of villains – such as Dr. Frank-N-Further in the 1975 cult classic Rocky Horror Picture Show, Pennywise in the 1990 horror miniseries It, and Captain Hook in the 1990-1991 animated Fox series Peter Pan & the Pirates.

Notably, Curry has shown an amazing ability to move seamlesly between theatre, musicals and films, successfully portraying the same character in various production formats. Curry was Dr. Frank-N-Further in the 1973 original London production of Rocky Horror, before reprising his role at the at the Roxy Theatre in Los Angeles and in the 1975 movie.

Other examples of notable roles:

Quite a few video games feature Tim Curry as a voice actor.

Curry voiced the god Stratos for the 2000 real-time strategy video game Sacrifice. His work was praised by several reviewers for bringing depth to the character.

Brütal Legend is an action-adventure video game with real-time strategy game elements. The lead characters is the roadie Eddie Riggs, voiced by and modelled after Jack Black. Riggs is transported to an alternate reality inspired by the artwork of heavy metal album covers, and in this world, the human race is enslaved by a race of demons. The leader of the demons – Doviculus, Emperor of the Tainted Coil – is voiced by Tim Curry. The game also features the voices of other celebrities, including Lemmy Kilmister, Rob Halford and Ozzy Osbourne.

In this game, Tim Curry is the voice of time-travelling Soviet Premier Anatoly Cherdenko.

Frankenstein: Through the Eyes of the Monster

Timothy James Curry was born on 19 April 1946 in Grappenhall, a village located in Cheshire, England. His parents were Patricia and James Curry, and he had an older sister named Judith.

Tim Curry spent most of his childhood in Plymouth, Devon. In 1958, his father – who was a chaplain in the Royal Navy – died of pneumonia, and the family moved to South London.

Tim Curry was sent to Kingswood School, a boarding school in Bath, Somerset.

In his youth, Curry was promising boy soprano (treble) but he eventually decided to focus on acting rather than music.

In 1968, Curry graduated from the University of Birmingham with a combined degree in English and Drama (BA Drama and Theatre Studies).