Gabriel Knight is a series of three computer games released in the 1990s.

All three games are point-and-click adventures created by Jane Jensen, and the music for them was composed by her husband Robert Holmes. 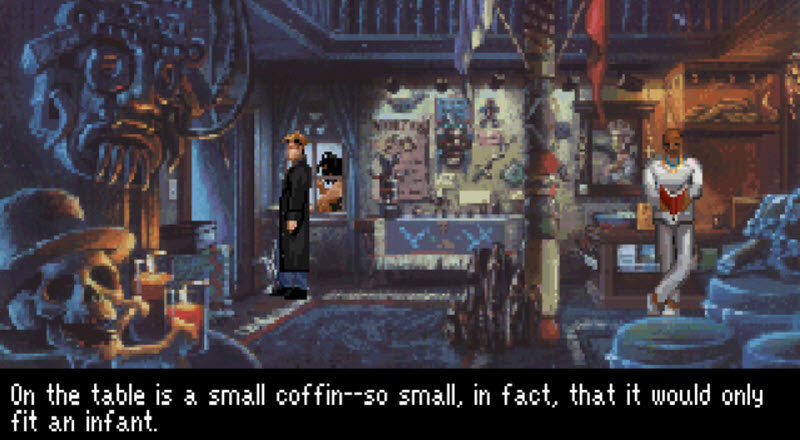 The main character in all three games is Gabriel Knight, a U.S. citizen who discovers that he hails from a long line of European Schattenjägers (“shadow hunters”) who seek out and stop those who use supernatural methods to harm others. He doesn´t have any supernatural abilities of his own, so he needs to rely mostly on investigation and cleverness to defeat his opponents, although he does eventually inherit a talisman capable of offering a bit of supernatural protection. He is aided by the characters Grace Nakimura and Gerde Hull.

Each game depends on the player´s ability to obtain information through investigation and by talking to non-player characters. There are objects to acquire, puzzles to solve and various other tasks that need to be completed to move forward in the game. In most cases, the game is linear and it is not possible to proceed to the next stage until a certain tasks have been carried out.

Gabriel Knight: Sins of the Fathers was a traditional 2D animated game. It became very popular, and among other things, it was praised for its excellent voice actors Tim Curry, Leah Remini, Virginia Capers, Mark Hamill, Michael Dorn, and Efrem Zimbalist, Jr. The supernatural theme of the game was voodoo.

The first game was followed two years later by the sequel The Beast Within: A Gabriel Knight Mystery. This video game didn´t follow the same style as the one before. It used full-motion video and is probably best described as an interactive movie. The supernatural theme was werewolves. The game received a lot of praise and Computer Gaming World crowned it “Game of the Year”.

The third game, Gabriel Knight 3: Blood of the Sacred, Blood of the Damned, was a 3D graphics game with a vampire-theme, using a custom-built 3D engine. This game didn´t become as successful as the two first, partly because of a generally diminished consumer interest in point-and-click adventure games.

Having each game within the same series produced in different formats is quite unusual in the industry, and the large costs associated with creating each game contributed to Sierra´s decision to not make a fourth Gabriel Knight game.

The Gabriel Knight: Sins of the Fathers 20th Anniversary Edition was released on October 15, 2014, to celebrate the anniversary of the first game.

This is a remake of the first game, featuring remastered graphics and sounds, as well as new voice recordings. It was released for Windows, OS X, iOS and Android.

Will there be a fourth game?

Easter egg: In the third game, it is possible to use the SIDNEY computer interface to search for “gk4”. The result displayed will be an entry on ghosts, hinting that ghosts had already been selected as the theme for a fourth game in the series.

After the release of the third game in 1999, Jane Jensen confirmed that she was already planning a possible setting and story for a fourth game. As of 2020, no fourth Gabriel Knight game has been released.

As late as 2012, Jensen stated that she still hoped for a fourth Gabriel Knights game.

There have been rumours that a Gabriel knight online slot is in development.  The rumours have claimed that the slot is being developed by Playtech casino or NetEnt Casino. Two well-known casino game developers.

These rumours are most likely false.  This is partly due to the rumours that have been inconsistent with details such as which developer is actually developing the game.  The second reason I believe these rumours to be false is that the Gabriel Knight franchise is not popular/well known enough to make it worth licensing the IP of the slot. Licensed slots are usually based on more mainstream franchises such as Jurassic Park, South Park or the Marvel Universe.

We will consider this rumour to be false until we see an official statement from a developer saying that they are indeed developing a Gabriel Knight slot.

The first and second game has been adapted into novels by Jane Jensen.

The first novel is a pretty straightforward adaptation of the events from the game, an approach that Jensen later came to regret as she felt that it wasn´t the best way of introducing Knight to readers.

For the second novel, she chose a different approach and this novel is inspired by the game rather than being a point-to-point narration of events from the game.

To celebrate the release of Gabriel Knight: Sins of the Fathers – 20th Anniversary Edition, Jensen wrote and published a short story online. Later, the story was adapted into a comic book.

Temptation: A Gabriel Knight Interlude takes place six months after the events in the third game, and the plot revolves around Gabriel´s pursuit of a seeleesser, a creature who allegedly eats souls.

This is the main character of all the games in the series.

When the first game starts, he is roughly 30 years old, runs a bookshop in the United States and writes horror fiction. He is charismatic and intuitive, and prefers to avoid responsibility. Easily distracted by books and women. His parents, Philip Knight and Margaret Templeton Knight, are both dead. The two people closest to him are his assistant Grace Nakimura, and his childhood friend, police detective Franklin Mosley.

In the second game, Gabriel has matured through his adventures and new responsibilities, and is also more financially successful because he used his experiences to write a novel that became a great commercial success. He has moved from the United States to his family castle in Europe.

In the third game, Gabriel is even more focused on fulfilling his inherited responsibilities as a “shadow hunter”.

In the first game, Grace Nakimura is a non-player character. She is Knight´s 26-year-old assistant and storekeeper, and she also influences him in ethical matters. She turns out to be a highly skilled researcher.

In the second and third game, Nakimura is a player character, and instead of being Knight´s assistant, she is his partner in the investigations. As a player, one will alternate between controlling Knight and controlling Nakimura.

There are more hints of romance between Nakimura and Knight in the second game, and in the third game they become upfront regarding their emotions. At the end of the third game, Nakimura leaves Knight to pursue her own path.

The intelligent and resourceful Nakimura proved to be a very popular game character and she has been included in many “best sidekicks” lists and “best female characters in video games” lists. In 2013, Pete Davison of USgamer called her “one of the best, most realistic female characters in game history”.

Gerde Hull appears in the first and second game. In the third game, she is only mentioned.

Hull is the caretaker of Schloss Ritter, the ancestral home of Gabriel Knight. When introduced in the first game, she is an anxious but optimistic young woman.

Hull becomes a valuable researcher for Knight. For a while, there is some hesitance between her and Nakimura, but after talking it out they become good friends.