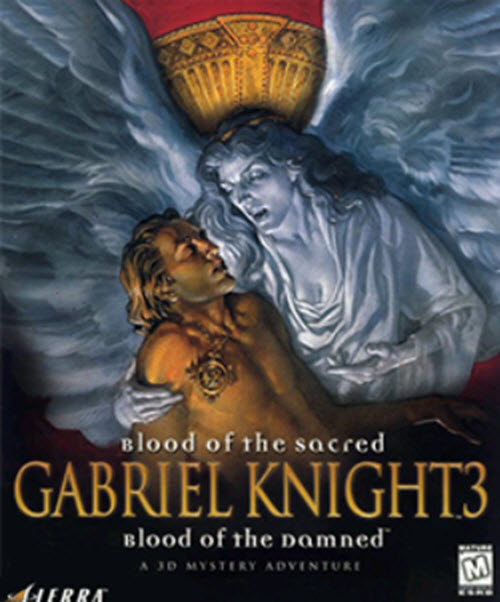 Released in 1999, Gabriel Knight 3: Blood of the Sacred, Blood of the Damned was the final game in Sierra´s Gabriel Knight trilogy of point-and-click adventure computer games. It differs from both the first and second game in the series by utilizing 3D rendered graphics, and its supernatural theme is vampires.

Blood of the Sacred, Blood of the Damned is set several years after the ending of the second game. Gabriel Knight is a full-time Schattenjäger and Grace Nakimura is a full investigative partner in the cases rather than being Knight´s assistant or side-kick. In Blood of the Sacred, Blood of the Damned, they work to save Charlie – the newborn son of the exiled Prince James of Albany – from a centuries-old threat that may involve bloodsuckers. Knight´s old friend Detective Mosely, who appeared in the first game but not in the second, now happens to be in Europe and joins the investigation.

The game plays out in a linear sequence of “time-blocks”. Certain required tasks must be completed to move on to the next block, but the tasks can be performed in a non-linear fashion within the block.

Both Gabriel Knight and Grace Nakimura are playable characters.

The game includes both mandatory and optional tasks.

There is a hint system, which can provide the player with clues to locations that must be visited and help out with the major puzzle of the game.

Since this game uses 3D rendered graphics instead of being a live-action interactive movie game, Jim Curry could return to reprise his role as Gabriel Knight. He is thus portraying Knight in the first and third game, but not in the second one.

Grace Nakimura is voiced by Charity James and not by any of the actors from the two previous games.

Detective Mosely was voiced by Mark Hamill in the first game, but is voiced by David A. Thomas Jr. in the third one.